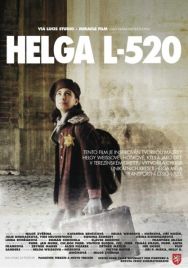 TEREZIN DIARY" or „DRAW WHAT YOU SEE!"
Dedicated to the memory of many thousands children murdered in the concentration camps during the Second World War.

Synopsis:
Artistic animated documentary film „Helga L-520" is inspired by the life story of Helga Weiss-Hošková /*1929/ during the time of her placement in the Terezin ghetto – from 7.12.1941 till 4.10.1944. The film is based on Helga's unique drawings, that she made while in the camp / facsimile are a part of holocaust museum exposures – Czech republic, Israel, USA, poland, Germany, etc. /. The visual component of the film builds on a contrast of the animated drawings and historical materials on one side, and on the other side the current footage of Helga in Terezin. The „statement" is taking place mainly in the visual layer – thanks to animated authentic drawings. Scenes with a clear symbolics / Helga on the crossroads, Clown – a family toy, photos of little Helga, etc. / originated from real shooting and pixilation directly in Terezín.
The film „Helga – Terezin diary" is a second project of „The Terezin Triptych". It's a seqel to an award winning graduation film of M. Zvěřina „Uvězněné sny" (Imprisoned Dreams).
The main addressee of this film are children and youth people. With this unconventional, „non-violent" and interesting form, we want to call up, that our history is not lineat. Life in a multi-cultural space and democracy is not an obviousness, it needs sensitivity for unique values of national traditions, empathy to values of other generations. Certain manifestations of xenophobia are a constant warning, they can't be overestimated, neither historically underestimated.