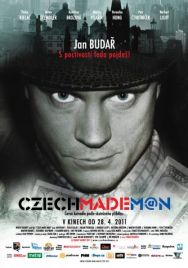 WHO DOES NOT ANYTHING, NOT MAKE THE

Synopsis:
The story follows one off-the books carrier of Jakub Vrana. From a poor alcoholic family dummy,to a king of Internet domains. Impossible became possible,rules and conventions are broken. As a boy,Jakub understands,that he can depend on nobody else, but himself. He jinks through the 80' regime like a crook and spends the breakthrough political revolution in 1989 quite uncommonly – among the lunatics in an asylum. After the revolution,his career takes off really fast. Up and down. To prison and back. To China and back. Everything goes so easily. What is behind such a easy carrier? From the unexpected and endless possibilities on the Internet grow into a virtual welfare. Here we investigate the true story behind the movie CZECH MADE MAN, starring Jan Budar.