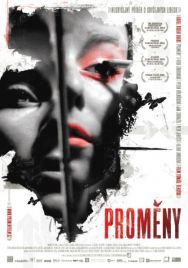 „Four people with nothing in common. Four stories drawn together. Four lives, that are about to change."

Synopsis:
A wife of a successful man who´s got everything she ever wanted in her life, except her own child. She'd do almost anything to get it. An athlete trainer, who devoted his life to sport, is now too old to archieve anything in his field and realises, that he missed everything. An old woman, living in a big, but empty house, without anyone to share her life with, seeking her purpose in spiritual world. And finally, a young mother with two little kids. Low wager and rough life aren't the attributes of a happy life. She fights and struggles, but the moment, when she gives up, has to come eventually.
Visually bewitching film Changes is following four different characters, four stories, that are connected just liguly and randomly. All of the stories and the plot culminate and the daring concept of the film imminently leads to a final confrontation. What else has to happen, to make life different? Four destinies connected togheter, are about to change forever.